At the bend in the cobbled alleys, dead ends and boulevards, the heritage of the region of Cholet reveals itself, original, rich and varied. A walk, from typical weavers' houses to seigniorial abodes, from Haussmann buildings to contemporary neighbourhoods, allows to see the vitality characterizing the city.
Download and print the Urban Tour

The Art and History Museum, unexpected encounter...
In the heart of the city, the Art and History Museum proposes to discover an exceptional collection, in spacious and bright rooms, where sculptures, paintings, tapestry and objects of memory cohabit. The visit is composed of two parts. First, around fascinating galleries mainly dedicated to the history of the Vendee War and then, Art development from the 16th to the 20th century.

The “Espace St Louis”
The creative Cholet committed itself to art and cultivates it in its two institutions. The municipal school of Arts and Plastics and the National school of Music, Dance and Drama have recently been settled in the pole “Espace Saint Louis”.

The castle ramparts
A first fortress was erected after the conquest of the Mauges and the region of Cholet by Foulques Nerra, Count of Anjou, on a feudal clod, present from the 10th century. Until the mid-19th century, during wars, the castle was destroyed and rebuilt several times before being burned down during the taking of Cholet people from Vendée region.

The Guard's standing stone
This imposing standing stone is the symbol of the setting of Cholet in a thousand-year-old history. In the 19th century, it was removed from the Guard's land, to Cholet and Mazièresen-Mauges's limits, on the Mail garden. It was registered in the Additional inventory of Historic Monuments in 1976.

The Law courts
With the transfer of the Beapreau’s sub prefecture to Cholet in 1857, the district's county town was given some new administrative functions. It became necessary to build a law courts with the norms of the end of the 19th century.

The Town and Agglomeration Hall
The Town Hall was inaugurated in 1976 and is friendly nicknamed “the typewriter”. It has a truly modern and functional architecture. 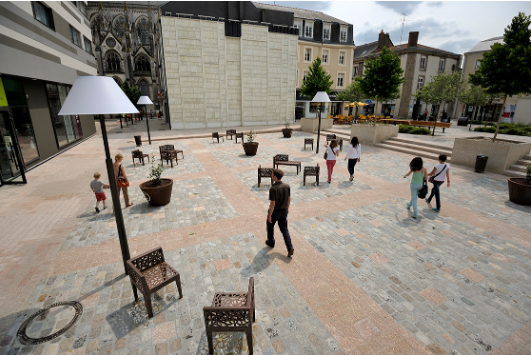 The “Salt loft” Tower (41, rue des vieux greniers)
The “Salt loft” Tower was built in the 16th century, it is registered as a Historical Monument. The renaissance decoration into this medieval tower contributes to its originality, and its watch-tower made with red bricks to its charm.

The tree with Weather vanes
It pays tribute to Roland Garros, the famous French aviator who was the first one to cross the Mediterranean Sea. He obtained his pilot's licence in Cholet.

The rue Nantaise
One of the oldest streets of Cholet, it was the shortest access to the city center for the travelers coming from Nantes.

Notre-Dame
This church is registered in the additional inventory of historic monuments. On the 11th century, it was founded by the monks from St Michel-en-l'Herm. During the Revolution, it was used as a stable and a prison. In July 1813, the duke of Angoulème put the first stone of the current NotreDame church with a 19th century new-Gothic style. From 1881 to 1900 the nave and the church towers, 65 metres high beams, were achieved. Also see the 14th century Virgin Mary, a copy of the sculptor Biron.

The Arcades Rougé
This area in the city center (3 hectares) invites to conviviality. This relatively contemporary place matches the historical identity, completely anchors Cholet in the 21st century.

The Grand café (Place Travot)
The first town hall was built between 1824 and 1827. Its monumental stairs, its balcony and its neoclassic pediment remind us of its administrative functions. Inside, the rich and refined decoration stands out against the façade's austerity. It became too cramped to welcome the city services, today it is a brasserie, Le Grand Café.

The old city Theatre (Place Travot)
The city Theatre of Cholet is another symbolic monument of the Place Travot, it has a neoclassic façade, it was built between 1884 and 1886. In 1949, the building was devastated by a fire. It was almost identically rebuilt.

The Hotel Guilloux (180, rue Nationale)
The hotel Guilloux , a privately run hotel built in the late 18th century, welcomed, at the dawn of the Revolution, the inhabitants of Cholet to talk about politics and Voltaire's or Rousseau's work. Also see, its pepper-box turrets and the privative garden inside the property.

Other things to do…and to see…

The weavers' houses (rue de Livet, la Dube, les Blanchisseurs, passage des Grands Jardin...)
These modest and typical houses welcomed looms in the basement. The ground floor was composed of one or two rooms where the weavers lived.

The Textile Museum
The Textile Museum, a living museum... The former bleaching factory built in 1881 is one of the last witnesses of the textile activity of the “Handkerchief City”. It became a museum, and now proposes a rich and living panorama, revealing the making steps from the fibre to the thread and from the thread to the cloth. In this exceptional site, demonstrators give life to looms. In that very place, the last traditional production workshop of the red handkerchief can be found.

Saint-Pierre
This first church must have existed from the 6th or 7th century in what was the Bourg Saint-Pierre. The church was destroyed by the Normans around 845. After the year 1000, the monks of Marmoutier built a Roman church that was changed into a Gothic church at the end of the 15th century. Rebuilt from 1752, it kept a wooden covered gallery until 1850. The priest Bougère and the architect Tessier were the constructors of the current church, the church tower was finished in 1933. The statue of Saint-Pierre weighs 850 kilos.

Sacré Coeur
The church and the set of bells are classified Historic Monuments. With a Romano-Byzantine style, it is the work of M. Laurentin, an architect of Cholet. The first stone was put in 1937 and the building was blessed in 1941. The materials used came from the region. A set of 39 bells, unfortunately mute, would be the 17th in France. This church was built thanks to hundreds of known and unknown donors. Mute since 1953, another set of 49 bells, is the only one also classified in the west, has been fixed in autumn 2011. 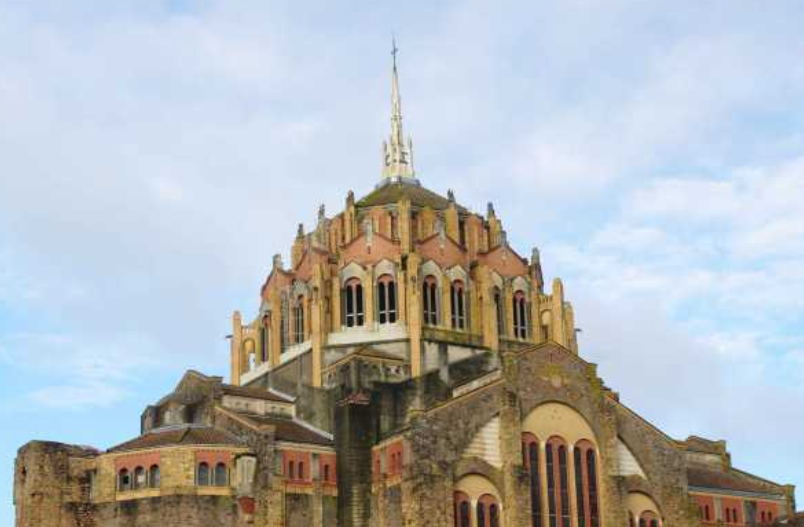 Glisséo modern urban leisure center
Glisséo is a leisure and sports center in the middle of the city, with a new practically unique concept of free time and sport in France. Two ice rinks (playground and sport facilities), eight swimming pools, an inside and outside area of more than 800 m ² (whirlpools, swirls), a children's slide, a pentaslide...

Shopping at Marques Avenue
Come in La Séguinière (5 km from Cholet) for a “Shopping” day at Marques Avenue. Ask for your J PASS card at the Tourist Office : 10% discount (except sales and special offers) ! Make good deals in factory stores...

The Golf
Take your clubs to play at the Chêne Landry's Golf, in Cholet and enjoy a 18 holes, on 56 hectares where calm and serenity are the key words. We propose to you the “green fee”. Green space, beautiful lake, wooded property, the Chêne Landry's golf will certainly be your next golf destination.
Tweet
Accessibility :
JOIN US !